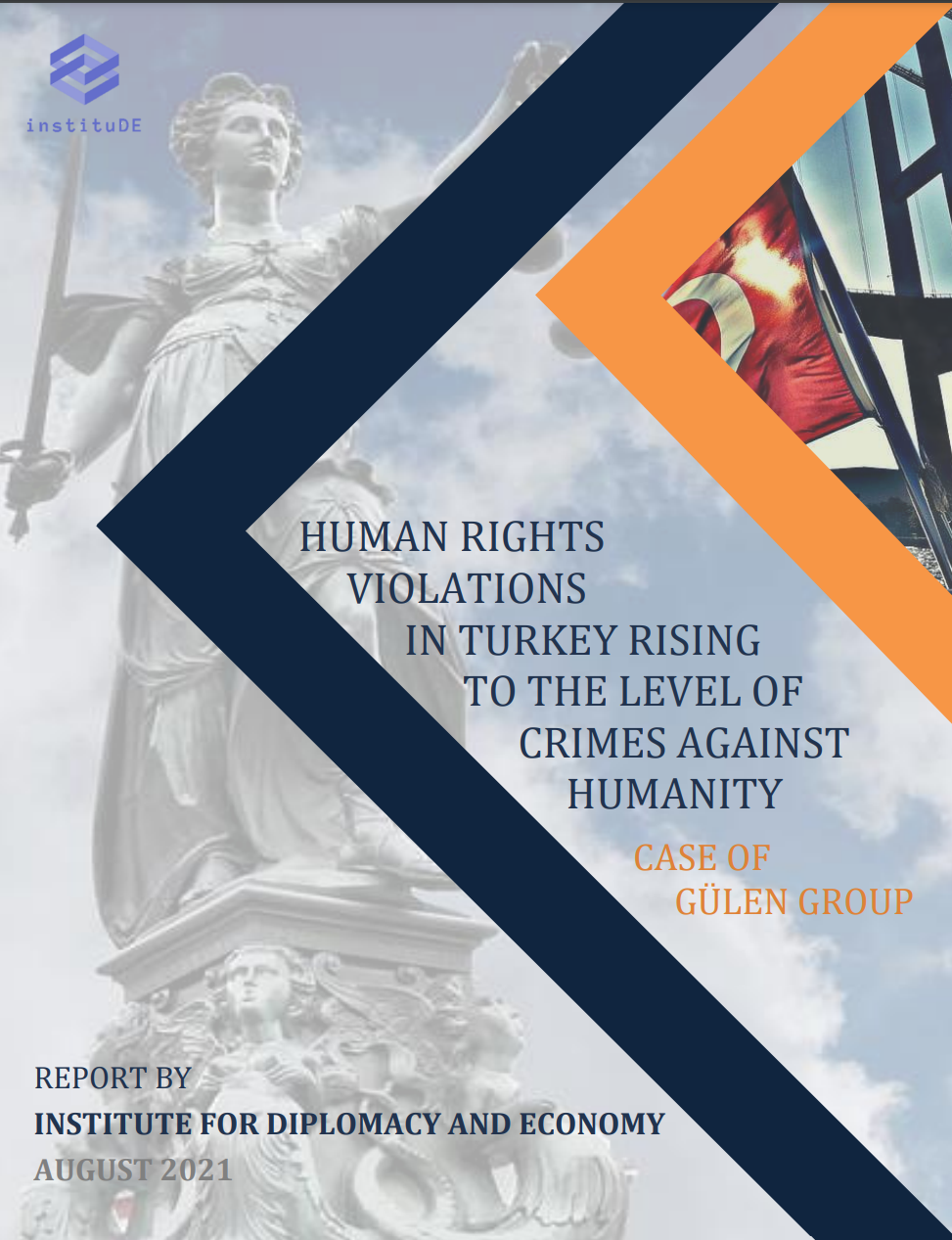 This report aims to elicit and analyze the outrageous acts and/or omissions of the Turkish authorities against individuals –whom they claim are affiliated with, connected to, or members of the Gülen Group– within the legal purview of crime against humanity. Given the scattered settings of crimes against humanity, the report first compiles the treaty law, case law and customary practice with regard to those crimes in order to reveal the elements of crimes. Thereupon, it applies those elements within a context in which individuals allegedly related to the Gülen Group have been persecuted through various acts or omissions imputed to the Turkish authorities. The report also examines the contextual element and scrutinizes whether the associated crimes have been committed ‘as part of a widespread or systematic attack’ directed against the Gülen Group.

The scope of the report covering merely the human rights violations in relation to the Gülen Group is by no means meant to deny, disacknowledge or downplay the predicaments suffered by other social fractions in Turkey. By contrast, the existing limited scope is the necessity and corollary of the contextual element of crimes against humanity being ‘taking a particular civilian population as a target’.

Crimes against humanity have come to be defined as offenses whose commission shocks the conscience of the international community and demeans all members of the human race, regardless of where they live or which culture or creed they belong to. That it can never be forgiven strips crimes against humanity of statutory limitations, which means, it is prosecutable and punishable irrespective of time. That it deeply hurts the conscience of the international community entitles and/or obliges each member of the international community to hold perpetrators to account. It is a crime so outrageous that it demands immediate action in the form of cessation of its commission and punishment of its perpetrators, no matter when or where it is committed.

Article 7(1) of Rome Statute states that the attack constituting crimes against humanity against the civilian population must be ‘widespread’ or ‘systematic’. The ‘widespread’ element/requirement/standard is determined by the scale of the acts (such as the number of the victims) whereas the ‘systematic’ element/requirement/standard connotes a pattern of control, direction or intensity by the de facto and de jure authorities of a certain state or other organizations. The term ‘population’ suggests that the attack is directed against a relatively large group of people who share distinctive features which identify them as targets of the attack. A prototypical example of a civilian population would be a particular national, ethnic or religious group.

That being said, what underpins the systematic character of the attack and thereby contributes to its legal qualification as crimes against humanity is the recurring, unabated and continuous nature of the associated illegal acts which ostensibly establish a dangerous pattern, as pointed out in the opinion of the UN Working Group on Arbitrary Detention. The number of Gülenists or alleged Gülenists suffering/having suffered human rights violations across the years appear to follow a repetitive, recurring and unceasing course, rather than being individual or isolated incidents. This repetition and continuation form a pattern that points out to the commission of inhumane acts within a preconceived policy being systematically executed by means of public resources.

As for the widespread criteria, the massive and frequent violations carried out collectively by public authorities with considerable seriousness and directed against a large number and multiplicity of individuals who are allegedly affiliated with the Gülen Group can fairly be asserted to have met this requirement. It is here worthwhile to note that the targeted Gülenists are victimized not because of their individual attributes but rather due to their alleged affiliation with the Gülen Group. The widespread character of the violations against the Gülen Group can be demonstrated with factors such as the geographical scope of the illegal acts being the whole Turkish territory – even the whole world as the practice of the Turkish government to extraterritorially kidnap “Gülenists” suggests– the large number of violations that shows no signs of ceasing, and the practice of profiling individuals as “Gülenists” using arbitrary and illegal criteria such as “Fetömeter” or “the Bylock app usage”. As pointed out in the opinion of the UN Working Group on Arbitrary Detention,2 the aforementioned features of the illegal acts, and their considerable consequences on a large number and variety of individuals establish a dangerous pattern which underpins the widespread character of the illegal acts and thereby leads to their legal qualification as crimes against humanity.

It is worthwhile in this context to note that specific crimes constituting crimes against humanity targeting the Group involve imprisonment and other serious deprivation of liberty, enforced disappearance including extrajudicial renditions, torture and sexual offences as well as persecution and other inhumane acts.

All in all, the scale, scope, gravity, intensity and prevalence of the human rights violations against individuals allegedly affiliated to the Gülen Group in Turkey have risen to such an outrageous level as to constitute crimes against humanity. The prevalent and all-encompassing characteristics of those violations indicate that the corresponding crimes have been committed as a part of systematic and widespread attacks directed against the Gülen Group. The fact that a large number and multiplicity of individuals who have the slightest link to the Group face judicial and/or executive measures and endure the grave consequences of some or all of the above-enumerated violations points out to the widespread character of such attack. The systematic character thereof manifests itself in the fact that the crimes have been committed within the framework of a preconceived policy adopted by the official security mechanisms and executed in an identical manner.

In sum, the human rights violations and offenses which the individuals suffer merely for bearing alleged links to the Gülen Group should be considered as having shocked the conscience of the international community and risen to the level of international concern. The legally pertinent characterization of those offenses would insinuate the perpetrators that their offenses are prosecutable and punishable irrespective of time and place and thereby help alleviate the ongoing culture of impunity in Turkey.