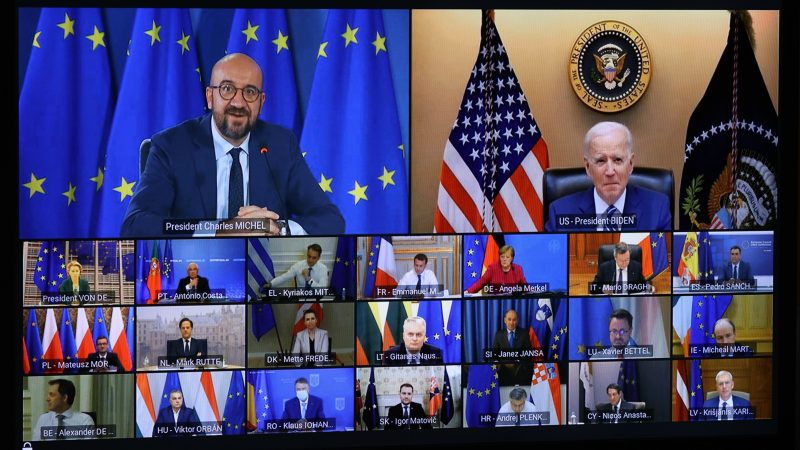 Meetings of the European Council and the NATO foreign affairs ministers gave hints of the US-EU strategy on their relations with Turkey and NATO’s increasing role as a platform where Turkey’s democratic backsliding will be discussed in line with US President Joe Biden’s transatlantic partnership vision.

Recent reports from those high-level meetings have revealed that the transatlantic partners might follow a balanced approach towards Turkey that includes carrots and sticks and that the US could take a tougher tone with Ankara.

As stated by members of the European Council on March 25, the EU will deepen its economic ties with Turkey. The EU is not expected to close its channels of dialogue with Ankara in the event of pressure from Washington on the Turkish government over its Russian defense system, other foreign policy issues or the erosion of the country’s democracy. The EU would thus assume a facilitator role during a possible US-Turkey crisis and be able to keep Turkey anchored in the alliance.

On the other hand NATO will put Turkey’s human rights problems on its agenda in the coming period, according to a speech delivered by NATO Secretary-General Jens Stoltenberg at the European Parliament.

During a campaign in which foreign policy was rarely mentioned, Biden released his vision and underlined the importance of NATO for democratic values, saying the organization is “the bulwark of the liberal democratic ideal” as an “alliance of values.” In an article published in the March/April 2020 edition of Foreign Affairs, Biden emphasized that “the triumph of democracy and liberalism over fascism and autocracy” not only created the free world but will also define the future.

According to his vision, democratic principles and foreign and security policies are one and should be considered the same.

Speaking to participants at the 2021 Virtual Munich Security Conference last month, President Biden also underlined the importance of democracy and the rule of law for the US-EU security partnership, saying: “Our partnerships have endured and grown through the years because they are rooted in the richness of our shared democratic values. … They’re built on a vision of a future where every voice matters, where the rights of all are protected and the rule of law is upheld.”

“We’ll fight for our shared values. We’ll meet the challenges of this new moment in history,” he added.

President Biden, who still hasn’t called his Turkish counterpart, Recep Tayyip Erdoğan, since taking office, participated virtually in the European Council, and has, according to EU observers, asked European leaders to keep a low profile with Turkey. He stressed “the need for continued US-EU engagement on Turkey” and the importance of “shared democratic values.”

A few days before the EU summit, President Biden had responded personally to Turkey’s decision to withdraw from the Istanbul Convention, the Council of Europe’s binding treaty to prevent and combat violence against women. Biden said in an official statement he was “deeply disappointed” by Turkey’s withdrawal.

Instead of a harsh tone, the EU leaders on Thursday offered new incentives to Turkey to improve cooperation on migration and trade despite the human rights situation in the country and concerns about its energy ambitions in the Mediterranean Sea. According to the final statement of the European Council, rule of law and fundamental rights will remain key concerns, and dialogue on such issues will be “an integral part of the EU-Turkey relationship.”

The Turkish Foreign Ministry welcomed the EU move in a written statement the same day, thanking “many EU member states that have common sense” for helping to put relations on a better footing. “Beyond dialogue in the areas of the rule of law and fundamental rights, we believe there is work to be done on the basis of phases in the framework of accession negotiations,” the ministry said.

Unlike his dialogue with the EU officials in Brussels, Turkish Foreign Minister Mevlüt Çavuşoğlu faced criticism from US Secretary of State Antony Blinken at the bilateral meeting held on the sidelines of Wednesday’s NATO foreign ministers meeting. In addition to the Russian S-400 air defense purchase, Blinken expressed concern over Turkey's withdrawal from the Istanbul Convention and emphasized “the importance of democratic institutions and respect for human rights."

Recent developments have shown us that President Biden’s new vision has been taken seriously by his European counterparts and that Turkey will be a litmus test for the US-EU security partnership promising a fresh democratic future.