The Reinvention of Territory, Remote Control and Shifting Borders 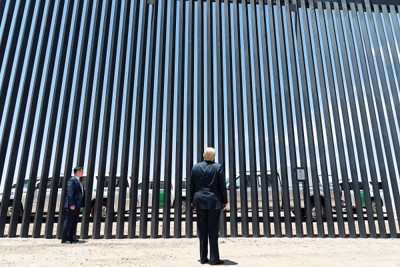 The characteristics and policies of states have significant effects on migration in addition to economic, political, environmental, and demographic factors. As a sovereign entity, the modern state, as Max Weber puts forward, has a monopoly on the legitimate use of power over its territory. In terms of mobility and migration, one of the most important characteristics of sovereignty for the states is the ability to control who enters their territory.

The territory is central to the contemporary understanding of sovereignty and the Westphalian understanding of statehood considers borders as permanent barriers surrounding a country along with its territory. Moreover, these static borders play an important role in defining not only a state’s territory but also its nationhood and jurisdiction.

The main prediction of post-Westphalian literature, on the other hand, is that sovereignty is declining and borders are becoming irrelevant. This view gained strength, especially after the fall of the Berlin Wall in 1989. For instance, strategist Kenichi Ohmae saw a “borderless world” in the forming and alleged that the nation-state would be obsolete because of multinational corporations and imperatives of the global economy. According to Ohmae, it would cause “the free flow of information, money, goods and services, as well as the free migration of people and corporations.” Similarly, Saskia Sassen stated that the global economy and human rights regime “reduce the autonomy of the state in immigration policy making.”

It is undeniable that globalization has resulted in an increase in the flow of goods and services, financial activities, and mobility of people. Over the last 50 years, the estimated number of international migrants has increased from 84 million people in 1970 up to 281 million in 2020, constituting 3.6 percent of the world’s population. Nevertheless, not all sorts of mobility are desirable by the states. Unlike the mobility that boosts economy and trade, unauthorized migration and smuggling are considered undesirable. Besides, due to disasters, conflicts, civil wars, and persecution, an increasing number of asylum seekers and displaced people have been crossing international borders. At the end of 2021, for instance, there were 27.1 million refugees and 4.6 million asylum seekers globally.

In comparison with the mobility of capital, product, and services, the cross-border mobility of people raises security concerns and triggers social and political issues. Thus, the increased mobility of people has led to a greater emphasis on sovereignty and territoriality and heightened the importance of borders. Whereas the number of border fences or walls was fifteen when the Berlin Wall fell down, today their numbers have reached about seventy in the world.

A sovereign state will seek to have de facto control over the mobility across its borders and de jure power over the conditions under which entry is authorized or denied. Due to the importance of borders as defining feature for statehood, states deploy measures and infrastructure to secure their borders and manage cross-border movements. To this end, governments resort not only to physical barriers but also to mechanisms such as visa requirements, consulates, and airline officers. They also benefit from digital technologies and “smart borders.” They even need the engagement of third countries to control the mobility and security of their borders. Following these developments, this paper aims to examine how the concept of the border has been transformed and discuss how states respond to the challenges posed by increased mobility.